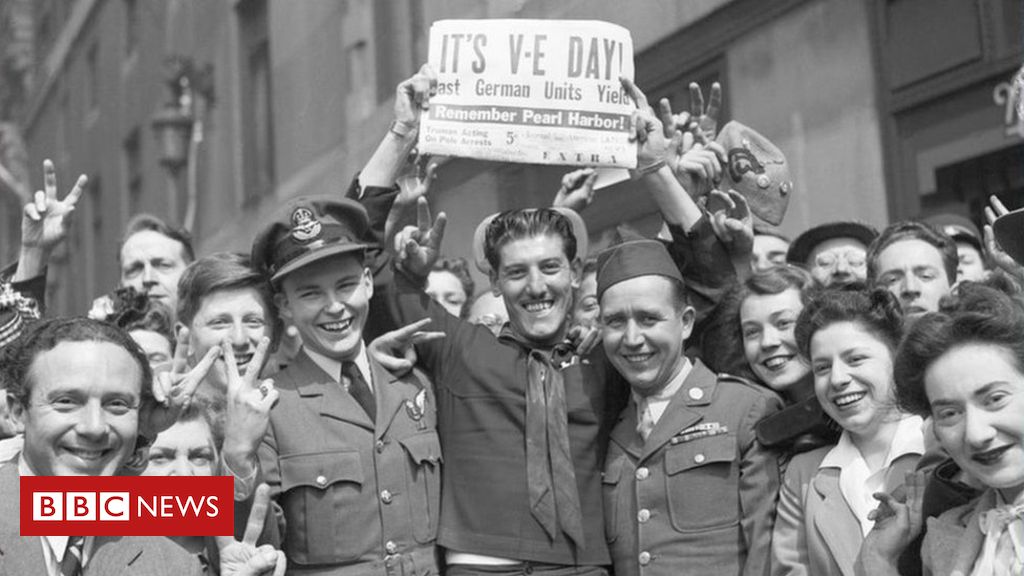 A few years ago, plans were put in place for this important occasion and even the Bank Holiday was moved from the Monday to the Friday causing havoc for diary suppliers hehe! While celebrations for VE Day will be different to planned this year, there are still plenty of ways to mark the occasion with you family at home. I hope this blog post will give you some ideas on how to mark the occasion at home.

What is VE Day?

On 8th May 1945, million of people rejoiced that, after 6 years, the war in Europe was finally over. VE Day – which stands for ‘Victory in Europe’ Day – is the day in 1945 when the German armed forces signed an unconditional surrender. Athough VE Day was strictly speaking a continental European event, it was celebrated all over the world. In London, more than a million people took to the streets and huge crowds gathered outside Buckingham Palace to see Churchill standing on the balcony alongside King George VI. 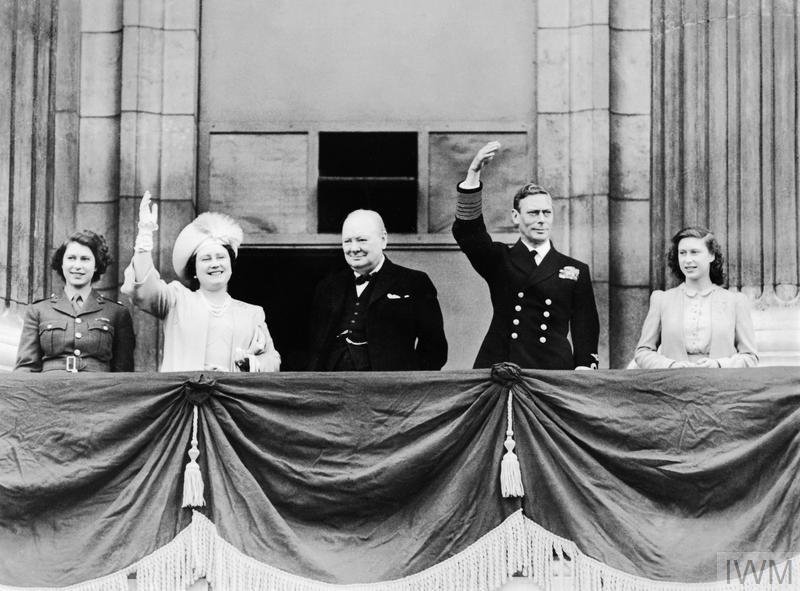 Veterans Minister Graeme Dey said: “As the 75th anniversary of VE Day approaches, it is only right we pay tribute to the determination and the sacrifices made by the men and women who lived through the Second World War. I hope the whole nation can join with me online in honouring a generation whose contribution continues to impact on us all in many ways.”

What is happening on VE Day 75?

The original schedule of events included a parade, a public concert and a reception. Due to the Cornavirus Pandemic, they will now be replaced with an online service of remembrance and a two-minute silence on 8 May.

At the heart of the commemorations will be a special address from Her Majesty The Queen broadcast at 9pm – the exact time her father spoke to the nation three quarters of a century ago.

It will form the centrepiece of an evening event produced by BBC Studios Events and featuring some of Britain’s biggest talent including Katherine Jenkins, Adrian Lester and Beverley Knight. Presented by Sophie Raworth, the programme will culminate with the nation coming together to sing the iconic, and fitting, World War II favourite We’ll Meet Again.  Other highlights earlier in the day include a commemoration of Sir Winston’s Churchill’s historic address to the nation to announce the end of the war in Europe. 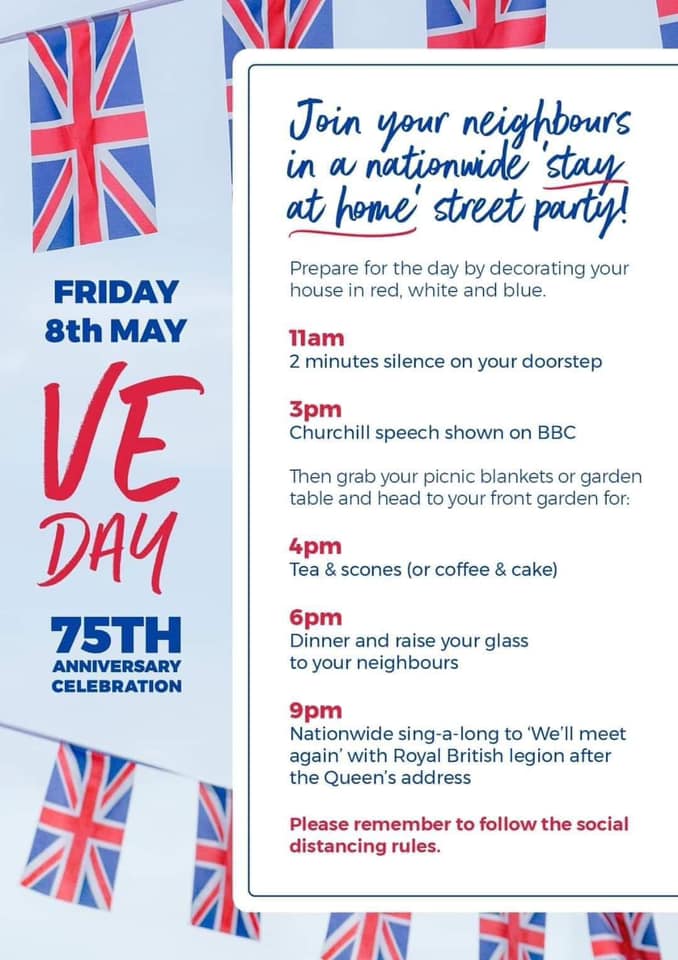 How can we decorate our home?

The idea behind a VE Day Stay At Home Street Party is that people can still celebrate the day with their neighbours whilst observing social distancing and staying at home.  Organisers are encouraging the public to decorate the outside of their homes in red, white and blue, bunting and flags to mark the occasion, so that whole streets are adorned in the nation’s colours.  This way, neighbours can enjoy the visual spectacle of national pride from their windows.

You need bunting and decorations!! Check out these links to help you create your own bunting. 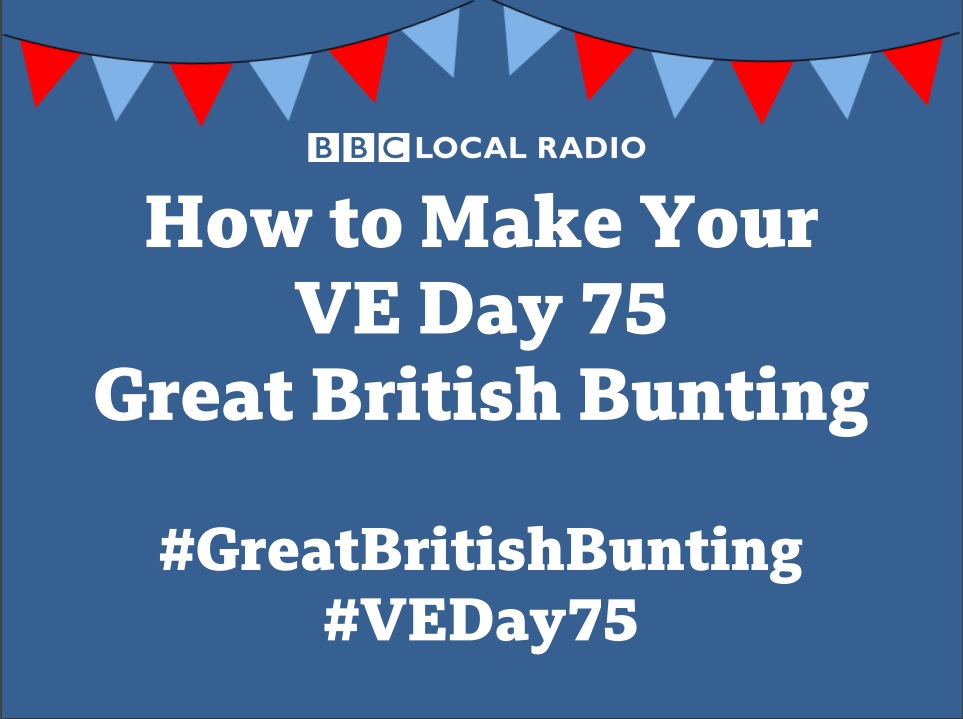 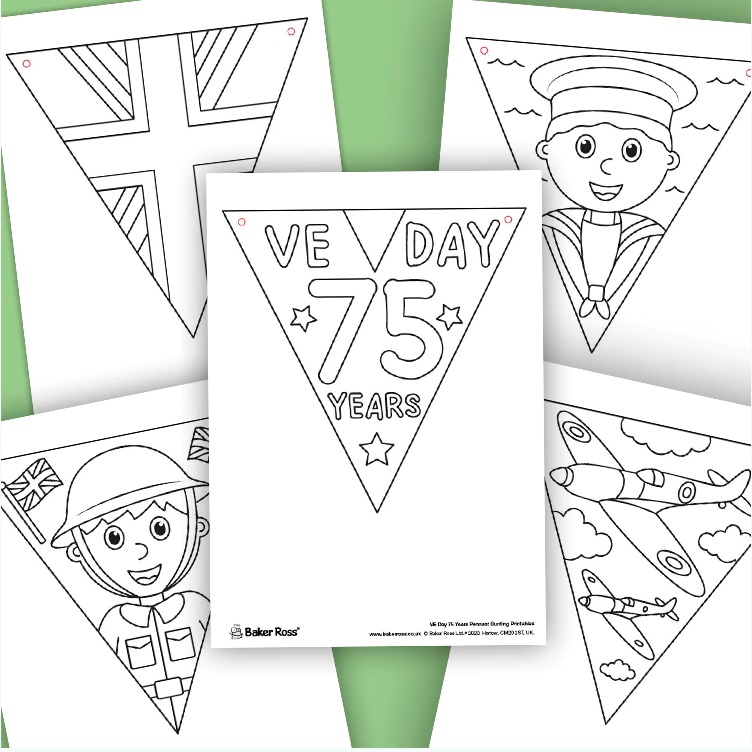 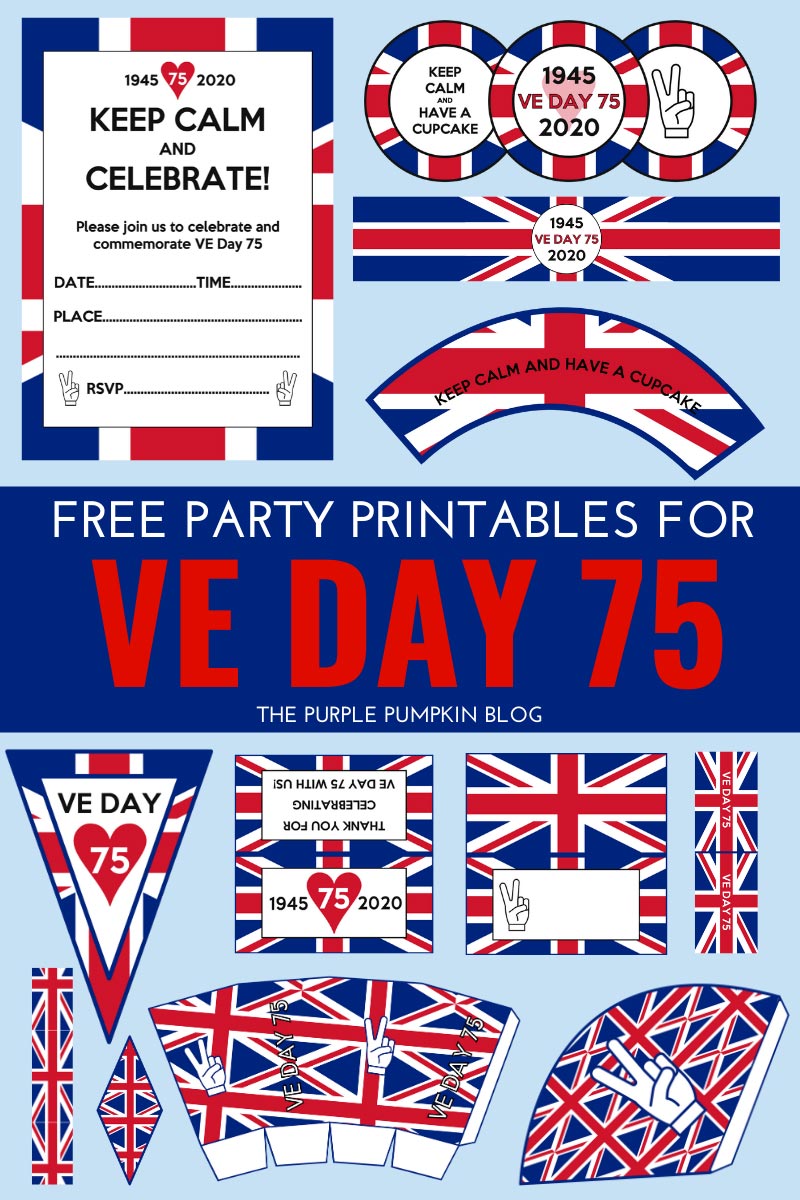 We are also being encouraged to have afternoon tea in our front gardens….all socially distant of course! This is a great opportunity to bake some traditional cakes like the Victoria Sandwich Cake or some scones. Fairy Cakes are also an essential and so easy for the kids to bake too. Some of the printables above allow you to make little flags for decoration! 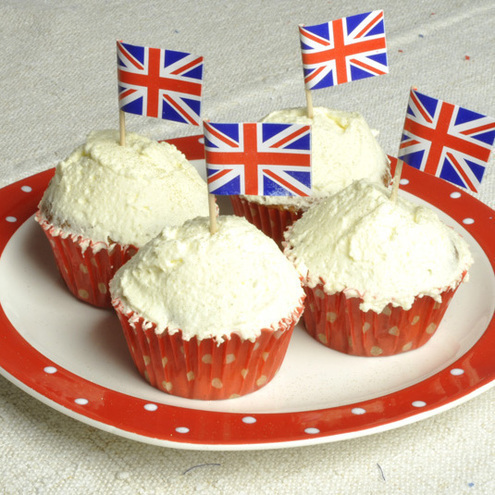 Also why not try and make some home made lemonade? Here Delia shows us how! Delia’s Home Made Lemonade 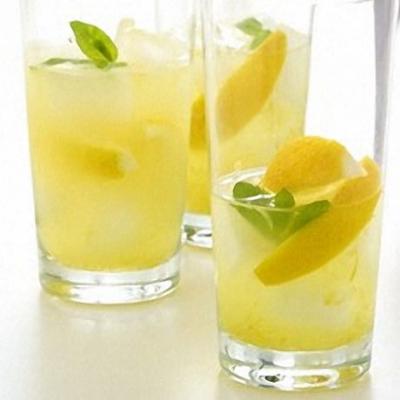 Maybe something a little stronger? 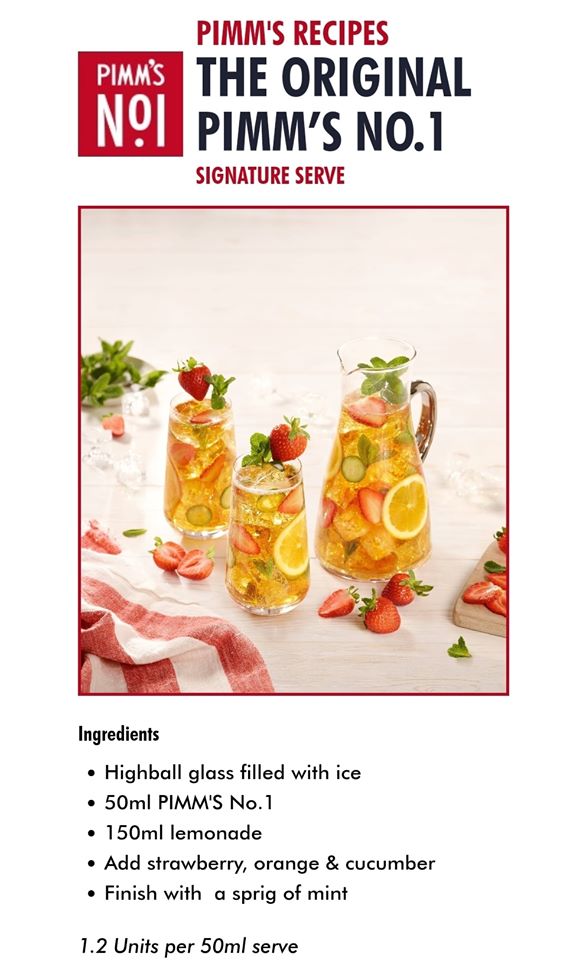 The UK 1940s Radio Station is proud to have been the original ‘1940s Radio’ on the internet, being launched in 2010. The station only plays the original music recorded and released during the 1920s, 1930s and the 1940s so it’s perfect backdrop to your VE Day party!

How can I teach my children about VE Day?

The BBC have a short film explains what VE Day and VJ Day were, and the events that led to the end of the war.

As the national champion of Remembrance the Royal British Legion is committed to ensuring that Remembrance is understood and available to every child and community in the UK.Understanding our shared heritage of Remembrance helps bring communities together, and ensures that we recognise the service and sacrifice of past and present generations. They have partnered with the National Literacy Trust to create a series of free, downloadable lesson plans and assemblies aimed at Key Stages 2, 3 and 4 that can be used to explain to children of different ages and backgrounds why, how and who we Remember. 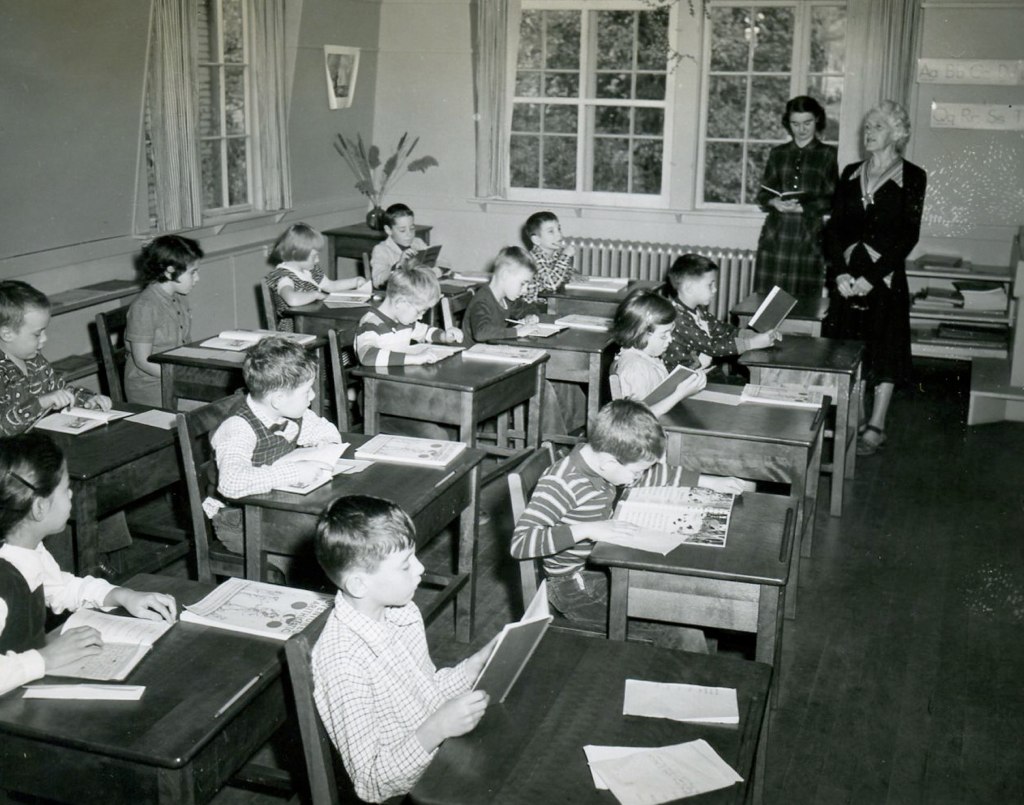 The National Memorial Arboretum is host to over 380 memorials each with their own stories to tell as well as the diverse woodland landscape which we call home. Please find below a selection of materials for KS2, 3 and 4 and for Adults relating to VE Day.

So there you go! I hope I’ve given you enough resources to create a fun day to pay tribute to the service and sacrifice of the entire Second World War generation, from British, Commonwealth and Allied Forces to evacuees and those who served on the home front.

Have fun and stay safe!

← Teenagers....rare as hen's teeth in my studio! Lockdown, running a business in a pandemic and keeping customers safe! → 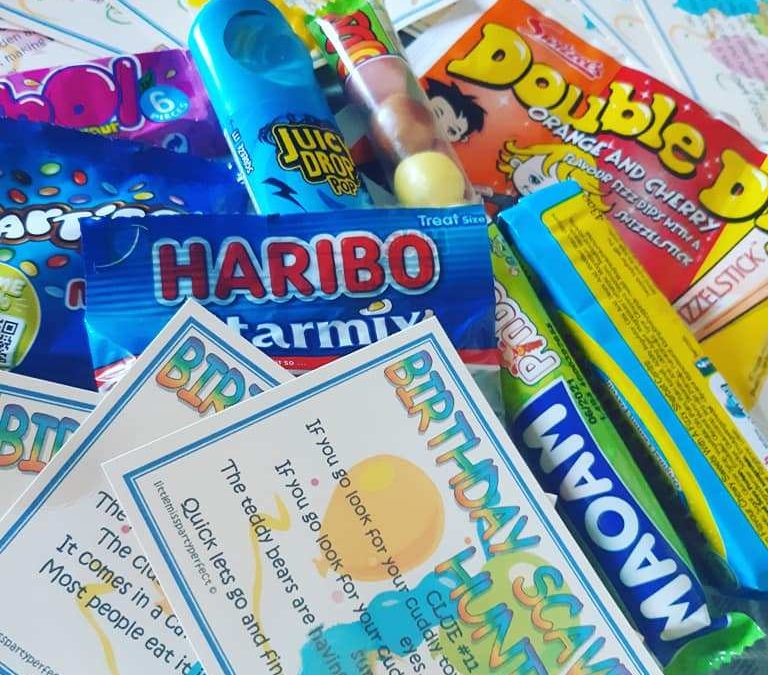 Lockdown Birthdays – Top 10 ideas to make sure their special day is a day to remember!

Since March 23rd 2020, we have experienced restrictions of one sort or another due to the pandemic. It's been 10 months of confusion, fear, anxiety and frustration but the world keeps turning and the way families have found ways to survive and have fun during this... 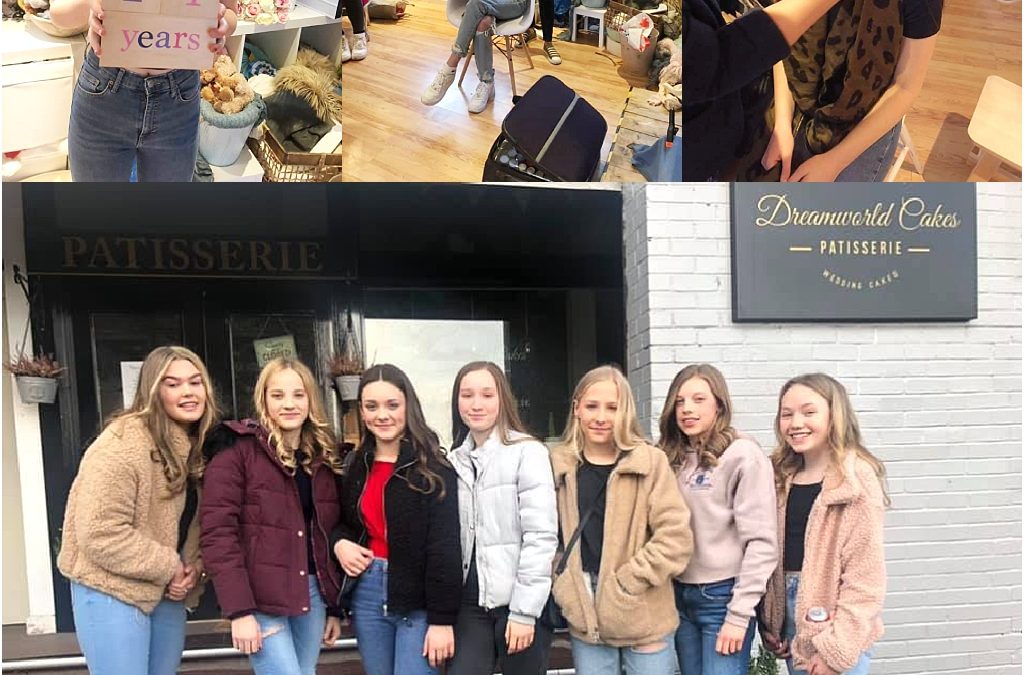 Teenagers….rare as hen’s teeth in my studio!

Earlier this year my niece turned 14.  We were chatting one day and I was asking her what she'd like for her birthday.....I suggested a photoshoot in my studio and she asked if she could being some friends. I then thought it would be lovely to get their hair and make...